The Home Office has today announced changes to the Tier 2 Restricted Certificates of Sponsorship (RCoS) procedure, to take effect for applications submitted on or after 6 September 2015 through the Tier 2 Sponsor Management System, in order to maximise the number of places available allocated on a monthly basis within the overall Tier 2 (General) existing annual limit of 20,700 places.

The announcement is timely given a report in the City Am newspaper today of employers becoming increasingly concerned that a lack of skilled labour is becoming a major obstacle to increasing growth, second only to the impact of oil prices.

The Tier 2 (General) annual limit was introduced in April 2011 by the Home Office and only applies to RCoS. RCoS are required to sponsor migrants who apply for Tier 2 visas outside the UK, with the exception of senior personnel earning at least £155,300 per annum and for those eligible to switch into Tier 2 from within the UK to take up a skilled job.

The current Home Office procedure prioritises places when the monthly allocation is reached through a points based system - places are then granted through the process under a highest points score. The points are awarded on the basis of whether the job is in a shortage occupation, PhD level occupation and on the salary offered.

The Home Office are changing the RCoS procedure, as in their view it currently ‘disproportionately awards points in a particular band’, for example ‘a job with a salary in a banding of £32,000 to £45,999.99 will score 15 points’. This has meant that in the month of June, the Home Office had not been able to issue RCoS to a non-shortage occupation with a salary of £34,000 through the existing process. The new process should address this issue.

The salary bandings will be increased as follows: 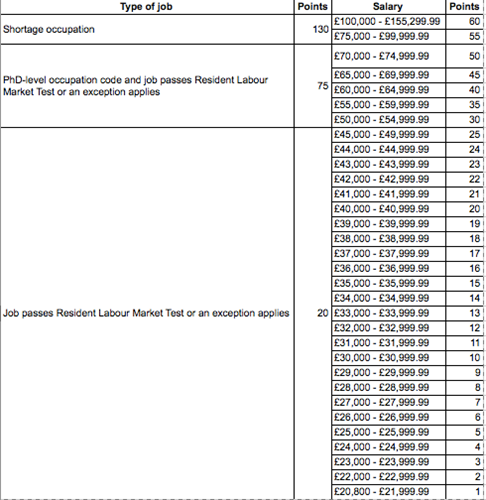 The Home Office also intends to allow any unused RCoS which have not been used within three months of their issue to be returned and thereby increase the number of RCoS available within the annual limit. These changes are unlikely to address the concerns of business including any ‘further tightening of Tier 2’ reported today, although it appears to level the playing field potentially for jobs advertised at lower salaries and allow some unused restricted certificates to be reallocated.

However a job advertised in accordance with the Resident Labour Market Test (RLMT) with a salary of £21,999.99 will score 20 points in the first band, whilst a job advertised within the second band will score 22 points. One can see that sponsors under tier 2 intending to recruit potential overseas employees having complied with an RLMT may find it difficult to have certificates of sponsorship granted when the RCoS proccess is oversubscribed. It may effectively penalise jobs advertised at lower salary rates even more than at present and one could argue is another obstacle to businesses who need to recruit skilled personnel.

Sponsors intending to recruit overseas skilled personnel in accordance with the RLMT at jobs with lower salary rates and perhaps small businesses should take note, that in a climate where there are reported skill shortages, it could become even more difficult to employ overseas skilled workers for certain types of jobs. No doubt the big winners are jobs advertised at higher salaries and for the overseas nationals who fulfill those roles and therefore businesses which can afford to pay those types of salaries under tier 2.

One just has to pose the question as to whether tier 2 will become the preserve of those who can afford to pay. It certainly potentially marks the start of a shift from coalition politics with wider consequences for sponsors under tier 2.

We recommend that specialist immigration legal advice is sought for those intending to undergo an application through this process from qualified lawyers.

RLegal solicitors are located in Regent Street, central London and are accredited by the Law Society and regulated by the Solicitor’s Regulation Authority, we are able to assist businesses and individuals based from within and outside of the UK on all aspects of UK sponsorship licences and Tier 2 visas, if you would like to consult with one of our solicitors based in the UK please telephone us on +44 207 038 3982, contact us at info@rlegal.com or by completing our online submission form.

RLegal Solicitors is an established, niche law firm specialising in UK immigration and nationality law. We are regulated by the Solicitors Regulation Authority.

The firm was founded in 2002 by David Robinson and Evan Remedios, the partners. Evan has practiced immigration law since 1991 David since 1996.

RLegal has provided our Group with excellent legal advice for over a decade. Their service had been personal, detailed, timely, and, most importantly, has resulted in successful applications in every case undertaken.
Stephen M Tishler The Pacifico Group Limited

How to escalate delayed Skilled Worker, Sponsorship and other work route applications